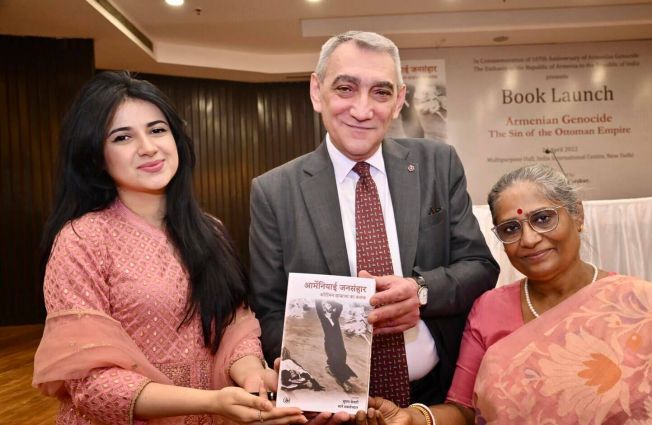 On April 24, 2022 the Embassy of Armenia in India organized the presentation of the book "Armenian Genocide: The sin of the Ottoman Empire" dedicated to the 107th anniversary of the Armenian Genocide.
The event started with a minute of silence to commemorate the innocent victims of the Armenian Genocide. Ambassador of Armenia to India Youri Babakhanian then welcomed the participants and delivered an inaugural address. Ambassador mentioned that it is painful to state that the Armenian people are still waiting for the victory of the truth, and the establishment of justice, as the crime of genocide cannot have a statute of limitations.

The Ambassador added that the Armenian people lost most of their historical homeland and about half of their population as a result of the Genocide. He emphasized that the fact of recognizing the Armenian Genocide is extremely important for Armenia's security. The 44-day war unleashed by Azerbaijan in 2020, during which it continued its anti-Armenian activities with the support of Turkey, Pakistan, and terrorist groups is the vivid proof of that.

In his opening remarks, the Ambassador also noted that the 100th Anniversary of the Armenian Genocide was commemorated with the message "Remember, demand", as the Armenian people demand recognition of the fact of the genocide and elimination of its consequences from the Turkish government.
In his speech, Ambassador thanked the authors of the book Suman Keshari and Mane Mkrtchyan, as well as the former Ambassador of the Republic of Armenia to India Armen Martirosyan for the first of its kind initiative to publish the

book on the Armenian Genocide in India. After his speech, Ambassador Babakhanian awarded the authors with gold medals of the Ministry of Education, Science, Culture and Sports of the Republic of Armenia.
The co-author Mane Mkrtchyan recalled that the idea to write a book on the Armenian Genocide in the Hindi language was conceived years ago; it was later presented to poet S. Keshari, who gladly supported the initiative. M. Mkrtchyan also briefly presented the five-year creative journey of the book and recited excerpts from the poems of Armenian writers Yeghishe Charents and Paruyr Sevak translated into Hindi.
The co-author of the book Suman Keshari in her speech mentioned that before starting the work on the book she had a wonderful opportunity to visit Armenia twice, and fell in love with the country and its people. She added that the book included many facts, photos, and descriptions of the Armenian Genocide.

Then, the keynote speaker, prominent Hindi poet and literary critic  Ashok Vajpei delivered his speech, emphasizing the importance of the condemnation of the genocides and the need for their remembrance. The latter also called on the Indian intelligentsia to jointly appeal to the Indian government to recognize the fact of the Armenian Genocide.

Chairperson of the Centre for Russian & Central Asian Studies of the Jawaharlal Nehru University Professor Archna Upadhya, who was a special guest at the book launch, and  Ashok Maheshvari, publishing director of Rajkamal Prakashan Samuh also delivered speeches.